I received a call from Merilyn Phillips as they had been looking for a kitchen cabinet painter the Wirral Caldy. A kitchen that they had installed had been painted rather badly by someone who they used. 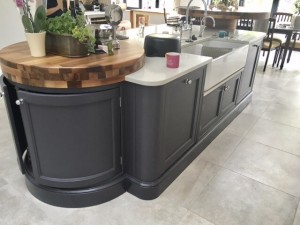 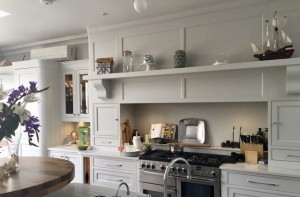 I was asked to go and have a look to see what could be done and hopefully improve it. The kitchen had been painted using Zoffany coatings not one you would normally use but from a distance looked OK. On a closer look it was badly painted and worse still, paint on the hinges, the floor, brush marks galore. Generally not good, even the glass was scratched. If we were to take on we had our work cut out. My biggest worry was that Zoffany being a retail paint it would not be durable enough as well as chipping very easily.

I priced the kitchen up for Merilyn and left it with her. A few days later it was agreed but not before I was asked is that the best price you can do as we need a kitchen painter. The job was booked in after a haggle, then I informed their client the dates as well as confirming the colours.

On to the job

With the kitchen being used we had to treat it to a full clean down. All the doors, drawers removed then the sanding could start. The brush marks were so bad it was difficult to remove them, but with a lot of hard work we got there. We informed the kitchen company how many hinges were needed as they needed replacing. Once all the sanding had been completed we were ready to start priming using our high adhesion primer mixed to the top coat paint. With just the primer on you could see the difference already.

Just getting to this stage took a full week mainly due to the extra preparation. The kitchen was now ready for the first of the two top coats Helmi 30. This is a very hard wearing waterborne coating developed in Finland. This paint dries with a beautiful sheen and one that with stands wiping down. As the week drew to an end we finished by fitting all the doors and drawers.  With a little help on some curved doors from the kitchen companies fitter. All the kitchen needed was to be used and with a happy client we were on our way.

Can you come back

A few days after we had finished I was called back as there were a few snags mainly chipping issues. This is what I was concerned about in the first place when we took the job on. Having explained to the client that unfortunately due to Zoffany being used in the first place this would be a problem. I or no one could stop it from happening, they are just going to have to be careful. If kitchen companies are to sell hand painted kitchens it does pay for them to get someone who can do them properly. Not only this get someone who knows what they are doing in the first place. 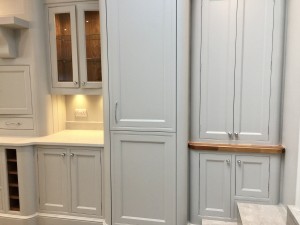 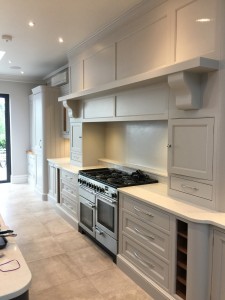 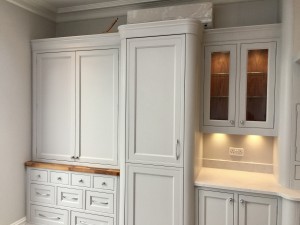 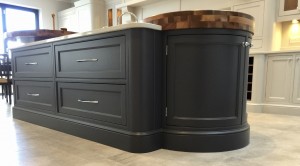 We very much enjoyed working on this kitchen and improving it for homeowner. Giving them the kitchen they should of had the first time without the hassle.

If you would like us to hand paint your kitchen in The Wirral or surrounding area we are the first port of call.