Hand painted kitchen Worsley: This article is about more than a hand painted kitchen in Worsley. I have since got to know the customers well. Barry is on a 3 year campaign to raise money for cancer research, which is close to my heart these days. 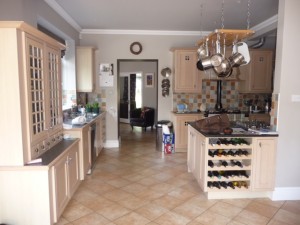 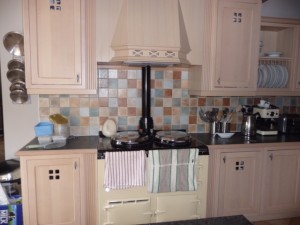 Helen had wanted to change the kitchen for quite some time, but as the house was on the market, they didn’t think it was worth the expense going for new. 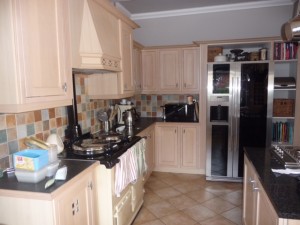 They had considered a full kitchen refurbishment, but that was also more than they wanted to spend. So, as they liked the look of hand-painted kitchens, they explored this avenue. Helen contacted me via my website.

Working towards a start

Having sent me plenty of photos, it was easy to price up the work involved, based on our set rates.

Following the submission of the estimate, I arranged to go round to talk colours and book a firm date. They had decided to go beyond painting and were having new granite tops, new tiles, and they were moving the glazed cabinet higher up the wall.

We had a date booked in the diary, to give them plenty of time to get all the jobs done. At this stage, though, colours still had to be picked, but Helen is a bit of a whiz with colours, so we left that final decision in her capable hands.

We were told that everything was on schedule and all I needed to do was confirm the colours. We arrived on the agreed date, to see that the granite had been changed to white and the cabinet had been lifted. It all looked better already.

We were eager to start, and the first task was a lot of cleaning, using Krud Kutter Original.

Cleaning the units wasn’t too bad, we use the Mirka Mirlon pads, which help the removal of grease whilst etching the surface. It’s important to rinse with clean water after cleaning.

As this was a big kitchen me and Matt had loads to go at! Practice makes perfect!

Four of the cupboard doors had square cut-outs in them. The style definitely dated the kitchen, so we discussed filling them. At first glance you would think it was a joiner’s job! There was nothing for a normal filler to stick to, but we have a few tricks. 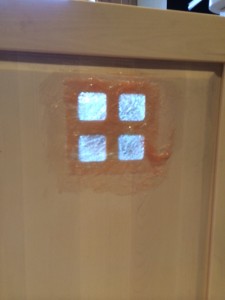 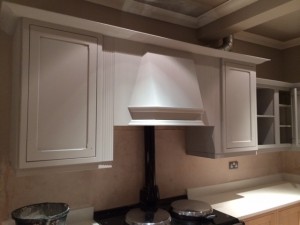 With all 4 doors treated the same way, I decided to prime up the doors with Otex oil based primer undercoat, which highlighted the areas in need of some more fine filling.

Without primer, you would be hard pressed to finish this by eye to a perfect finish, or at least, it would take longer than this approach.

With four perfectly filled holes, and an invisible mend, we second primed these doors, along with the rest of the kitchen cupboards and cabinets.

We had the primer tinted to match the topcoats, a speciality of Holmans, and it was starting to look completely different already. A hint of things to come! 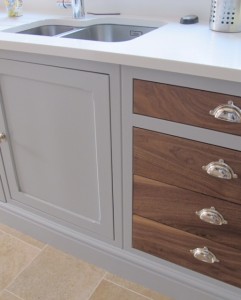 Helen and Barry had really put some thought into this job.

For example, Barry had sourced some walnut, so that the spice drawers & four of the kitchen drawers near the sink could be changed over to this beautiful wood.

The glazed unit that had been lifted up, altered the look of the kitchen again, but the Georgian bars also dated the look. We removed the glass, and Barry took the bars out for us. This left some more holes to fill and feather in!

So now with the kitchen all primed, it “just” needed top coats. Furniture Feelings and Helmi Matt is a paint we all like and trust in.

After a light rub down and vac off then wipe down with a tack cloth we finished the main units were mixed into the equivalent of Manhattan 15 and the island & glazed cabinet in Strong White equivalent. 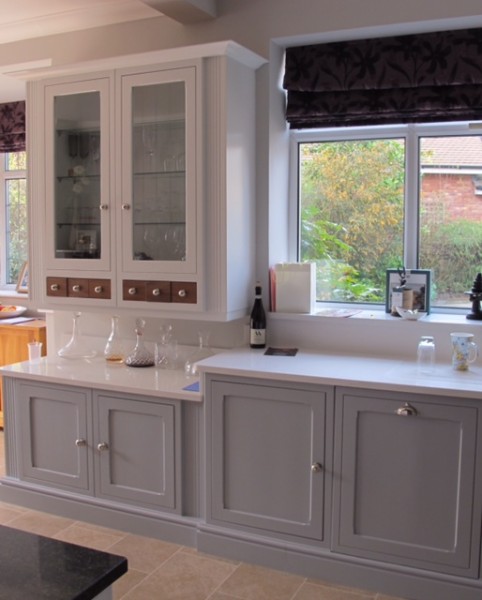 As with all sundries we use, they are available from Mypaintbrush who specialise in products not easily available in decorating shops.

Going back to the walnut drawer fronts, these were finished in 3 coats of Kiva satin for a beautiful finish.

The handles were changed, and the kitchen was left clean. It looked every bit as good as a brochure Helen had shown me of a very expensive kitchen that suited their house to a tee. 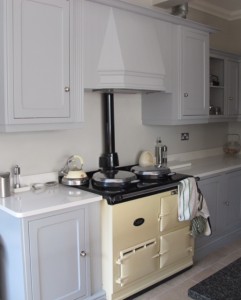 Helen had the decorator on standby for when we left and a new floor was due to go down so I waited a while for these after shots and I’m glad I did.

Now with all this work done you now have More than a hand painted kitchen in Worsley. Working for Helen & Barry was a great pleasure too.

A project of Barry’s with a difference

Barry is working hard for the next three years, climbing 29 of the world’s highest mountains! The huge undertaking is part of his campaign, raising money for Cancer, which is close to my heart, since being diagnosed with Multiple Myeloma (bone marrow cancer) March 2014.

Good luck Barry in your quest. wish you both well – Jason & Matt.

Thank you for reading this post. If you are interested in having a kitchen Painted you can get in touch via my email info@jsdecor.co.uk

We are the first port of call for hand painted kitchens in the North West and Cheshire.

I liked Jason from the moment he came to look over the job. No nonsense, totally reliable and professional. The kitchen is now a nice place to spend time in. We also upgraded worktops and appliances. Before we had quotes of around £60k. I have got the look I wanted at a fraction of the cost of a hand painted new kitchen (think Martin Moore, Tom Howley style). He is also a lovely guy who we enjoyed having in our house.
Normally I can’t wait to be rid of tradesmen as they are often not befitting of the name. It was a totally enjoyable project. I cannot recommend highly enough.